Belgian Peacekeepers Memorial Kigali : At the location of the killing of 10 Belgian UN Blue Berets, there is a modest museum. They were sent to protect Prime Minister Agatha Uwilingimana’s residence at the start of the Genocide under the leadership of General Dallaire. When the genocide began, Presidential Guard soldiers stormed the house, disarmed the Belgians, and took them to Camp Kigali, where they were murdered. The 10 stone pillars commemorate the ten servicemen that were slain. 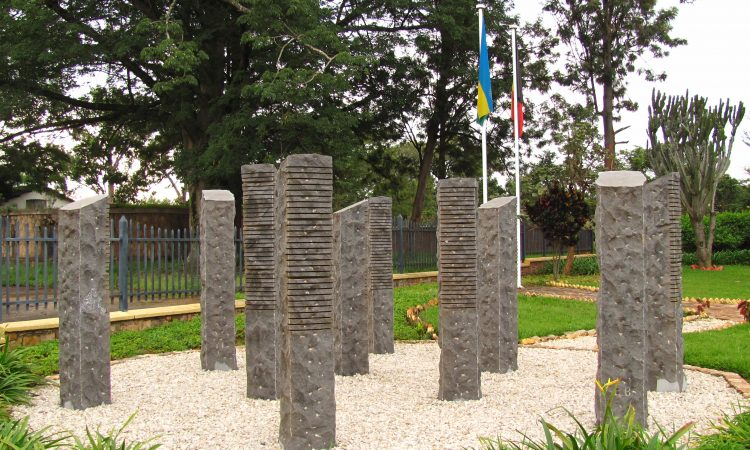 The Camp Kigali Memorial honors the ten Belgian soldiers who were killed on April 7, 1994, while guarding Prime Minister Agathe Uwilingiyimana at the commencement of the Rwanda Genocide.

A Brief Background on the Belgian Peacekeepers Memorial in Kigali.

The United Nations Mission in Rwanda was established in 1993, with Belgium serving as the sole foreign state to send professional and highly trained soldiers as a peacekeeping force in Rwanda.

This was regrettable because Belgium was also a former colonial power in Rwanda until its independence in 1962. Normally, the UN avoids having individuals from former colonial countries active in relevant countries; but, given the refusal of all other industrialized nations to participate, there wasn’t much option in this situation. The remainder of the mission’s employees were Ghanaians, Tunisians, Bangladeshis, and other nationalities from poor nations.

Belgian soldiers being in Rwanda obviously presented a risk to the entire environment, as well as to the Belgian forces themselves, since they could possibly be targets of attack.

But what happened on the first day after the genocide began, on 7 April 1994, was a very well premeditated killing for a very particular goal, rather than a raging mob assault.

There had also been a warning. An informant, the ominous “Jean Pierre” (the UN’s secret name), revealed, among other things, that Hutu extremists had planned to assassinate 10 Belgian soldiers in order to destabilize the UN operation. The calculation was that if Belgium suffered losses in its old colony, it would withdraw from UNAMIR, and the operation as a whole would be doomed. In any event, it would pave the ground for full-scale genocide to begin.

The context for this assessment was the instance of Somalia, when US soldiers were slain and their remains were publicly paraded through the streets, prompting the US to withdraw. For the Rwandan radicals, it was a painful lesson learnt all too well, and one they intentionally attempted to apply to their own situation. As General Romeo Dallaire, the Canadian commander of UNAMIR, subsequently said, “they knew us better than we knew ourselves.”

The idea did, in fact, work. Shortly after the planned murder of the 10 Belgian soldiers, the rest of their forces were withdrawn — while all Western nations withdrew their expatriate people from Rwanda, as well as a sizable part of the UN mission staff.

In a nutshell, the “world community” opted to abandon Rwanda to its fate, i.e. to the genocidaires who now had almost free reign. It only took the deaths of ten Belgian troops for the world to flee with its tail between its knees and then stand by as over a million Rwandans were killed ruthlessly.

Their deaths were undoubtedly heinous and disgusting. They were apparently insulted, threatened, and beaten before being killed. Some were slain immediately away, while the remainder resisted for three hours in one of the buildings at the Rwandan army barracks where they had been brought, but were eventually overwhelmed and killed by grenades and machine-gun fire. The mangled remains of the Belgian paratroopers were subsequently thrown in a mound at a local hospital mortuary, causing more consternation for the UN personnel and commander when they eventually reached their soldiers.

The memorial monument, established by the Belgians on 7 April 2000, is therefore a doubly gloomy spot: not just as a commemoration location for the 10 deceased soldiers, but also as a place to grieve the “international community’s” horribly reactionary reaction – to flee and abandon Rwanda.

What to see during your visit to the Belgian Peacekeepers Memorial Centre in Kigali.

The facility, which was once part of an army installation, is entered by a gate, with an ancient barrier boom that has been permanently swung 90 degrees out of the way. Beyond there is a cluster of single-story buildings, with a tiny memorial garden to the right.

Tourists who visit Camp Kigali will witness the ten granite stone columns, each commemorating a Belgian soldier killed on that terrible day. Each granite stone has the initials of each of the ten Belgian soldiers engraved at the bottom; and these can be matched to the commemorative plaques on a neighboring wall that displays the complete names of the deceased troops. In addition, each stone has horizontal incisions bent into it that represent the soldier’s age at the time of their death.

Camp Kigali also includes the structure where ten Belgian troops sought sanctuary and fought till their deaths. The structure is distinguished by bullet-ridden walls that identify the location where they were gunned down. There is also a memorial with the names of each soldier who was killed on the premises.

There are two additional rooms available, as well as a number of trilingual (French, Dutch, English) panels providing a general overview of different genocides throughout history (albeit not all of the incidents described here are universally classified as genuine genocide), as well as some basic facts.

How to get to the Belgian Peacekeepers Memorial Centre in Kigali.

The Belgian Peacekeepers Memorial Centre in Kigali is located in Kigali City, 22 minutes from Kigali International Airport. Just south of Kigali’s centre, about a mile from the large roundabout at the city’s northern entrance, three-quarters of a mile from the Hotel des Mille Collines, and only steps from the Serena Hotel (formerly Diplomats, the InterContinental), at the end of Avenue de l’Armee, where it curves 90 degrees to intersect with Boulevard de la Revolution.